Although we went to Trentham Gardens on several occasions, there is only one that I remember really well. That’s because I was 15 at the time complete with raging hormones and a pair of Chelsea boots which got me off on the wrong foot with my dad  before I’d got out of the garden gate to catch the bus to Manchester. In retrospect, he was probably right – they weren’t suitable footwear for a school trip and after a few hours my feet didn’t half ache. Having said that, they were probably responsible for meeting a girl from a school in Stafford who had also made the trip. Our eyes locked across the Waltzer floor and I was instantly nailed. She liked my shoes! wow! They must have also helped her to ignore my acne which was fairly widespread at the time. Her name was Anne Ross and her friend liked my friend Mike Smith and so we joined up for a trip to the Trentham Gardens outdoor swimming pool where Mike’s spectacular simulated fall off the high  diving boards (I’d seen it before so knew it was a crowd pleaser) meant that Anne’s friend was totally impressed with his apparent bravery. 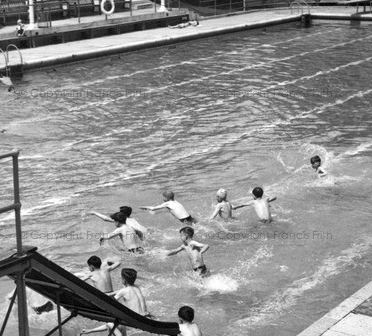 I got Anne’s address and threw her an orange from our coach as we left the car park. Not quite the golden apple but all I had left from the lunch my mother had kindly packed for me. Christine Keeler was all the rage at the time and Anne had long wavy hair and a daringly short shift dress which was the closest thing I had seen to the figure which was splashed all over the Daily Express at the time. A couple of weeks later Mike and myself made the trip to Stafford by train and spent a wonderful day in the company of these two bright young things, never to be repeated. I learned a great deal.

I never visited Trentham again, leaving Xavs the following year. I did once visit an art exhibition held in the vicinity where all the pictures were being sold at considerable sums. It turned out the the artist was quite famous – Rolf Harris in fact. I often wonder whether the value of the paintings has deteriorated of late. I have learnt recently that the outdoor swimming pool is no longer there and I believe the gardens are much improved after falling into neglect in the seventies. I prefer to have the memory unsullied so I doubt that I shall ever visit again.